I didn’t get a chance to wrap-up my weekend reCUP last night as the Boy and I were having a nice Valentines day date night with a yummy living room picnic while watching The Martian.

So, without further ado…

After being sick all week, I finally felt up to leaving the house and venturing out where the people go. So, to Sweet Tomatoes we went! It was very busy and it quickly wore me out. If you don’t know me well, this won’t mean anything to you, but… I didn’t even have dessert, I was that wore out.

Of course, once we got back home, I got comfy and made myself a big bowl of strawberry ice cream.

I still wasn’t feeling quite up to running, and I didn’t want to force anything, so I allowed myself to sleep in. Until 10. It felt so nice!

Fit2Run was having a Marathon Trials watch party, and I had been looking forward to it since I saw it announced on the Facebook page. Yes, I have reached that level of RunNerd.

It was so much fun (and so inspiring) getting to watch the Trials!

And knowing that both Meb and Shalane made the Olympic team is going to make my Friday-night dinner that much more exciting. Oh yeah, did I mention…? 🙂

On the way out of the mall, I grabbed a yummy acai bowl to hold me over until the Boy got home.

We had Crazy Cafe for dinner and then went over to my parents house. We got mom an Amazon Fire Table to replace her old Nook, and wanted to show her how to work it. Hopefully she’ll get in some good book-reading and solitaire-playing. 😉

I met up with Mandy for yoga in the park sponsored by Lululemon Hyde Park.

They do a complimentary yoga session every Sunday morning, and I have been saying for way too long that I wanted to check it out. This weekend, I finally did! It was a ton of fun and a great way to bring in the day. I will definitely be going back.

After yoga, the Boy and I went out to the outlet mall to do some shopping, and then ran a couple errands after.

Have you tried the new molten chocolate latte? Yum!

On our way home, we picked up Mellow Mushroom for our living room picnic.

And then proceeded to have a great end to our Valentines Day date night with a viewing of The Martian. We both greatly enjoyed the movie (that doesn’t happen often). If you haven’t seen it, I highly recommend it.

And lastly, I was pretty stoked to finally receive my Run the Edge shirt…

What was the high and low of your weekend?

I’ve been bad, or busy, or both… I don’t know. 😉 I have a vacation recup AND a weekend recup to post.

Let’s get to the highlights of our PA vacation…

We were in Pennsylvania for one full week, and had a blast hanging out with the Boy’s friends from his college days, and spending quality time with his family.

We spent the day in Pittsburgh, and got there just in time for brunch. Meag took us to DeLuca’s down in the Strip District. It’s a very low-key diner that only accepts cash, but their menu is enormous and the food is delicious!

I opted for the hotcake special. Very tasty and very filling!

On the way back to the car we walked past a teeny-tiny little donut shop that looked way too cool to pass up. I had zero room left in my tummy, but couldn’t resist a couple gourmet donuts. Maple bacon and ginger sugar for the win!

The next stop on our agenda was REI. I love REI. Always have. Always will. But, there are NONE to be found in Florida. Since suitcase space was limited, I had to behave and just picked up a couple small things.

We ran a few more errands, and just got to enjoy each others company.

Once Meag’s boyfriend got home from work, we all headed out to Burgatory for dinner. And, boy was it good!

Pittsburgh is about an hour drive from where the Boy’s parents live, so by time we got back, I was far too sleepy to run. So I logged zero miles for Monday and was kind of bummed about that.

Be careful what you ask for! All I want every time we go to PA is some snow. Well, I finally got it! We woke up to this…

Very pretty! But, not terribly good for running. I took my time getting ready because it initially didn’t look too bad, but by time I got outside, the snow was really coming down. I decided to run a small loop multiple times to get in my miles. The snow was really coming down and my tracks were covered by time I made the loop around. It just wasn’t working for me. I really didn’t want to fall. Obviously! 😉 Because of that, I really slowed my pace. I was running a 15:00 mile, and my form was all over the place because of the road conditions. They just weren’t quality miles, so I threw in the towel just over 2 miles. It wasn’t worth it to risk injury, getting sick (because of the cold and wind), etc.

I wasn’t happy, but I got out there and tried and that’s what counts.

The rest of our Tuesday was spent rather lazily. Later that night, we went over to one of the Boy’s friends’ house and played some video games. I’m not a big video-gamer, but it was fun because I kept kicking their butts! 🙂

I was starving by time we left, so we stopped at Eat ‘N Park, where I enjoyed a super tasty gardenburger with an egg on top.

We spent the day in Pittsburgh again. We had a lot of fun getting acai bowls at Amazing Cafe. Such a cute cafe!

Meag teaches spin and yoga (and just started her own blog, check it out here), and invited me to attend her hot yoga class following either spin or a 3-mile run with the Lululemon Run Club that meets up at the yoga studio.

I really didn’t want to risk getting behind on more of my miles, so running for me! I had 5 on the schedule for the day, so planned to head out for 2 prior to meeting up with the run club. As I was heading out, one of the girls yelled to me to say she wanted to join.

At first, the socially-awkward girl inside of me cringed at this idea (what if she’s too fast for me? what if she’s annoying? what if I’m annoying?), but then I remembered…we’re all runners here, and you know what, runners come in all sorts of shapes, sizes, and skill-level. What makes the running community so awesome is that we support one another and share a love and passion for running.

Her name is Toni, and looking back, I am so so happy she joined me. This run was a lot more than I had planned for. There was still snow on the ground, as well as ice. Talking with her helped to distract me from the frigid temps, and it was nice having a guide in an unfamiliar spot.

I felt great for those first two miles.

We made it back to the studio, and met up with the other girls that were willing to brave the cold and snow. And, then we were off…

I’m going to blame the Florida in me for the fact that I was way behind everyone else. It was icy, and I didn’t want to fall. 😉 It wasn’t until the last mile that things got brutal. My leg tightened up, and I lost all feeling in my toes.

P.S. the Lululemon Run Club is a pretty awesome group of girls to run with. And also the best dressed run club I have EVER seen…

And then it was time for hot yoga. Have I told you how much I hate hot yoga?! I don’t like being hot. With that being said, it was a really great class and it was so awesome to see Meag in her element, doing what she loves.

Taking her class makes me want to get back into yoga (not hot yoga). That’s to be continued though…

Since our flight was the next morning, it made more sense for us to stay at Meag’s house. We headed back home, got in a good nights sleep, and that was it.

Before moving to Florida, I lived in Colorado for seven years. That’s actually where I consider “home”. But, it was on this trip to PA that I realized, I was never a runner there. The only running I ever did was recreationally at an indoor track, and that was maybe a mile here and there.

Now that I have had the chance to be a cold-weather runner, I: 1) have some tips to share, and 2) will no longer complain about the heat in Florida. I have year-round running weather, and for that I am very fortunate.

10 Tips for Running in Cold Weather

Stay tuned for my weekend reCUP tomorrow and a GIVEAWAY!

What cold-weather running tips am I missing?

It has been a great week, but I am ready for the weekend to be here!

Tuesday morning I met up with Joellyn for a nice run. It was just an “extra” run for me (hence not on my training plan), so I went out completely for fun, and had a blast.

We ran on the Riverwalk- which I have run countless times- but it was so great not to care about my pace or time and just enjoy the sights!

Joellyn lives much closer to the office, so she offered to let me get ready for work at her house. Afterwards I made a much-needed coffee run. I chose to try out Kahwa coffee. It was great! And really reasonably priced.

After work, I had to get to my Tempo Tuesday session at Fit2Run. I met the nicest girl there too! Her name is Andrea, and she just joined the training group. She is training for Honolulu in December. Lucky!

I had 35 minutes on the schedule for the day. It was a great run, even if it was like 200 degrees out.

I decided to work from home yesterday, as I had a few things I needed to get done and just wanted the peace and quiet.

At 5:00 I started getting ready for some fun…the Fit2Run Fun Run that is. 😉

Hoka was sponsoring this week, and brought out a bunch of shoes for everyone to demo.

I went ahead and gave ’em a try; hey you only live once. Hehe! I was given a pair of the Bondi style, and immediately after putting them on was amazed at how comfy and cushiony they were.

Post-run, I have to say I am not a fan. Yes, they were very comfy, but I felt wobbly while running in them. And my form just felt off; also, my knees and even my hips started to hurt by the end of the 3.1 miles.

And, just for fun… I just bought the cutest purse. You can check it out here! 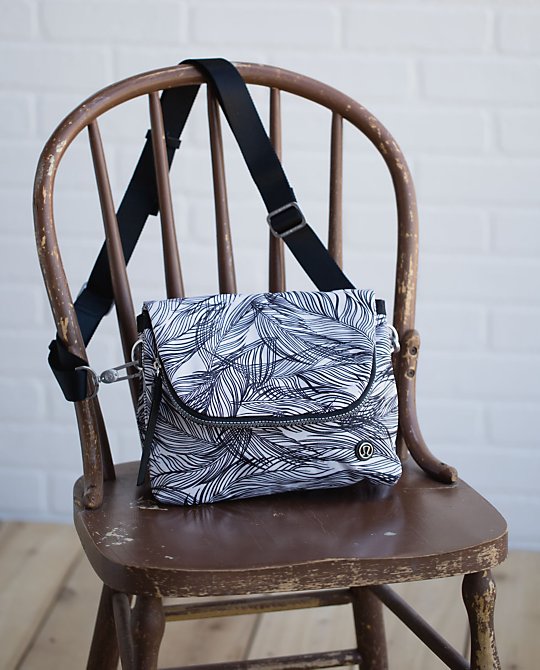 (It’s a random one) Do you use compression socks and/or sleeves?

And, if so which ones?